7 ways the bicycle changed the world

In 2018, the UN declared June 3rd World Bicycle Day. Until then it was April 19th, in memory of Albert Hofmann’s acid trip when he was cycling home under the effects of a new substance, LSD. If the intention was to remind us that the bicycle is a “drug” that makes us happy, April 19th works perfectly. And so does June 3rd and the rest of the year because what would our lives be like without bicycles? To explain what the bicycle has meant for humanity, let’s look at 7 ways it changed life, society, technology and the world:

An affordable means of transport

In the late 19th century and early 20th century, the mass-produced safety bicycle became an affordable and practical means of transport for a large part of society. It was used to commute to work, as a work tool and as a cheap and easy way to get around for leisure. This brought about enormous social changes, from early tourism to the next major change.

Bicycles for the mind

Steve Jobs refers to this article by S.S. Wilson which states that a person on a bicycle is more energy efficient than a person in a car or in an airplane. Further research revealed that there are, of course, species that move more efficiently than a human on a bike. Still, the widespread use of bicycles in the late 19th century and early 20th century changed the way people thought about space and time. Being able to travel long distances in a few hours put an end to the isolation of many remote rural areas. Moving quickly on short distances sped up key and basic processes such as mail delivery.

We embraced these changes and pursued more. We can even cycle virtually, but what would it mean to lose our bike? The movie “Bicycle Thieves” can serve as a reference. Going back to Jobs’ example, we only realize what technology means when our cell phone battery runs out or my laptop breaks down while I’m writing these lines.

The more people use bicycles, the more and better infrastructure we need. This is true today and it also happened during the bicycle boom. One example is the Good Roads Movement founded in 1880 in the United States, a coalition between farmers’ and cyclists’ organizations to ask the federal government to invest in the improvement of rural roads. As fate would have it, it was the arrival of the automobile at the beginning of the 20th century that led President Woodrow Wilson to sign the Federal Aid Road Act in 1916, the first federal highway funding legislation in the United States. This relationship between two- and four-wheelers does not end here.

Cars owe a big thanks to bicycles

We are not saying that the car would not have become what it is today without the bicycle, but we do have to mention a technological advance that was designed for bikes and later used in the first gasoline-powered cars: the pneumatic tire developed by Scottish inventor John Boyd Dunlop in 1887. Neither bicycles nor cars would have been as fast and comfortable as they are now without this invention. 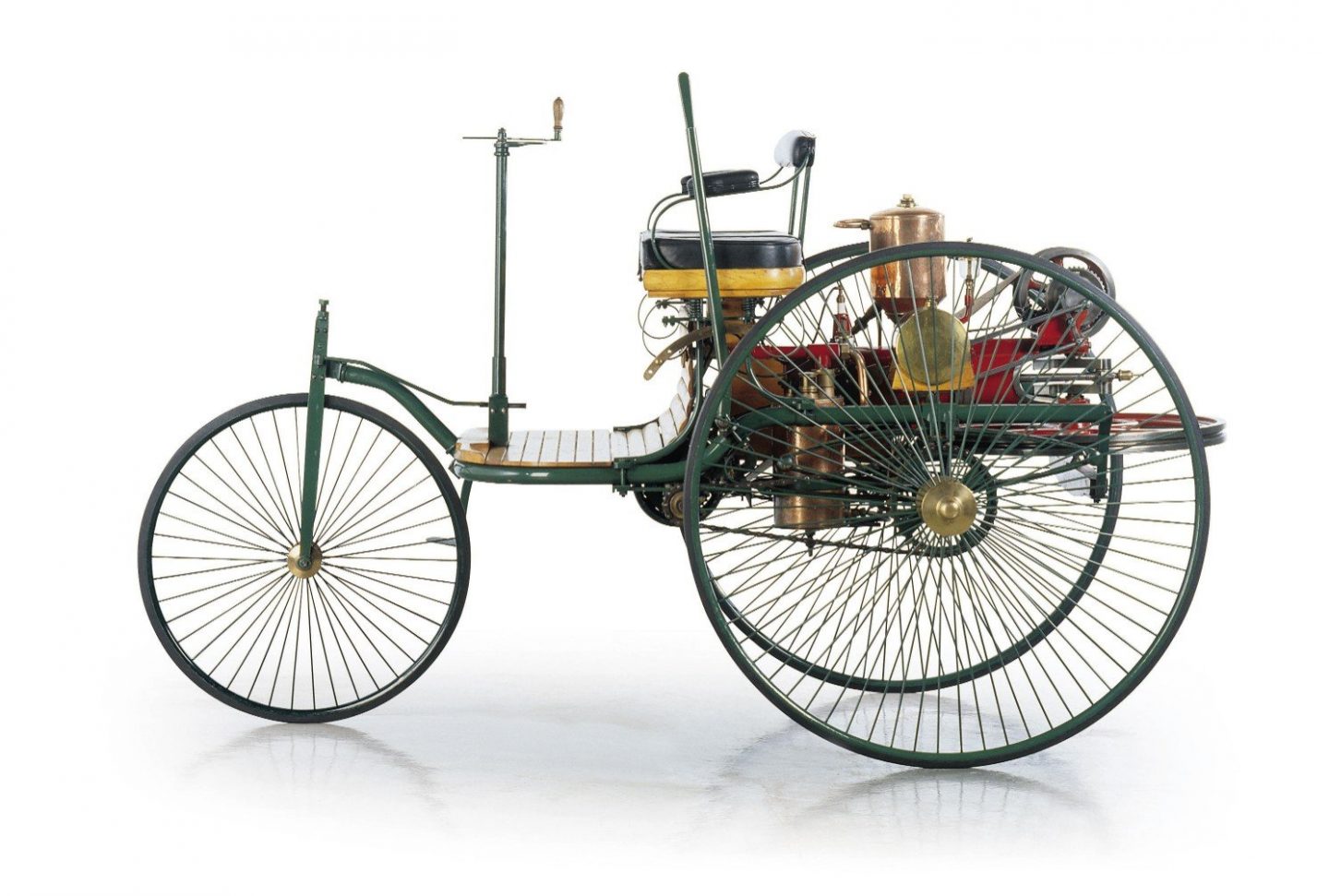 This three-wheeled automobile with a rear-mounted engine is the Benz Patent-Motorwagen built in 1886. It is considered the world’s first car and has three wire-spoked wheels, a bicycle chain and a differential, invented by James Starley, father of the bicycle industry in the UK and uncle of John Kemp Starley, who created the concept of the bicycle as we know it today.

Everyone knows the Wright brothers Wilbur and Orville as aviation pioneers, but before they embarked on this air journey, they were successful entrepreneurs in the bicycle industry in the late 19th century. In 1892 they founded a workshop-store in Dayton (Ohio) where they manufactured, repaired and rented out their Van Cleve bicycles. With their yearly profits of $2000-3000, they began to research aeronautics and in 1899 they were able to experiment with their first flying devices. They used bicycle parts in their first gliders and built a wind tunnel for aerodynamic tests in their workshop. In 1909 they signed a $25,000 contract with the U.S. Army.

Horses made of steel 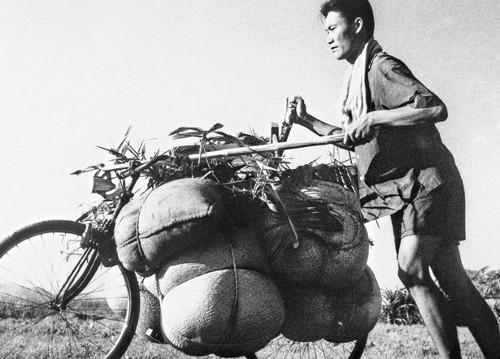 Airplanes were of little use in Vietnam. The simple nature of a bicycle prevailed over the U.S. Army’s sophisticated aircraft. Bicycles were modified and reinforced to carry heavy weights (over 200 kg and, in cases such as Steel Horses, even up to 600 kg) through narrow and winding jungle paths. War reporter Harrison Evans Salisbury stated before the Senate Foreign Relations Committee in 1967 that they were instrumental in the North Vietnamese resistance. Senator Fulbright responded: Why don’t we concentrate on bombing their bicycles instead of the bridges? Does the Pentagon know about this?. Perhaps the senator was being sarcastic, but today many tourists traveling to Vietnam cycle along one of those military supply routes, the “Ho Chi Minh Trail”.

In 1896 the American women’s rights activist Susan Brownell Anthony said: the bicycle has done more for the emancipation of women than anything else in the world. She was experiencing the bicycle boom firsthand and her statement was perhaps far-fetched, as there was no actual change for those who couldn’t afford a bike. Although bicycles were becoming cheaper, for most women the price of one bike equaled several months’ wages, and let’s not forget that they also had to eat, drink, buy clothes, shoes and pay rent. On the left you can see the daily wages in the UK in 1906 and on the right the price of a bicycle: 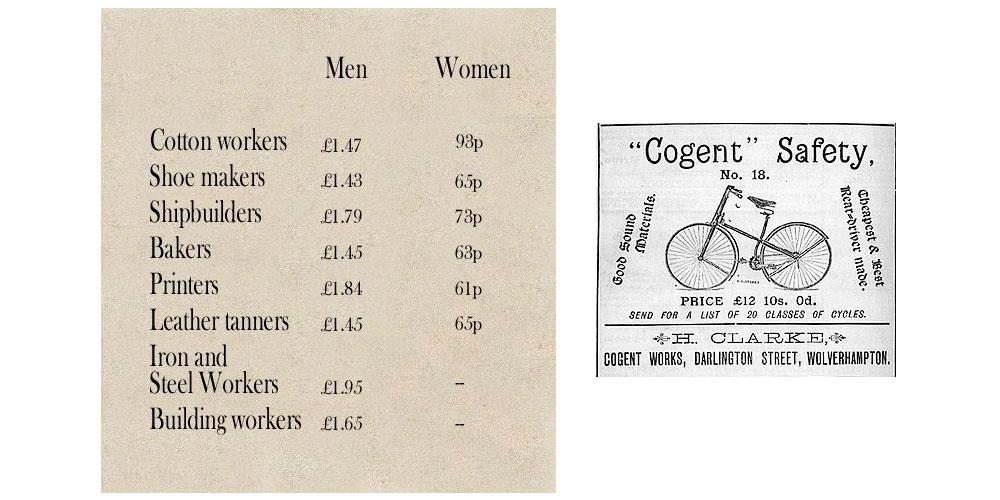 Shortly before the bicycle boom, in 1888, an article “White slavery in London” was published. Women were working 14 hours a day and earning 4-8 shillings a week. These poor working conditions, low wages, gender pay gap, and the lack of voting rights went back decades and continued until well after the bicycle boom. One can say that the bike was simply “passing by”, coinciding in time with the profound struggles women were going through. So rather than generalizing, let’s just say that two-wheelers played an emancipating and liberating role only for some women.

They did, however, bring about changes in women’s fashion at the time. Tight corsets and long skirts were gone. Bloomers and shorter, split midi skirts became popular. Tessie Reynolds wore pantaloons, a shirt and a coat to cycle 190 km from Brighton to London and back in 8 hours and 30 minutes in 1893 at the age of 16.

Women were also able to go cycling unchaperoned. The conservatives were against the new clothes, freedom and exercise. They even claimed that contact with the saddle was sexually immodest. Many of them, however, had no problem with women working from dawn to dusk in appalling working conditions for paltry wages.

Many suffragettes clearly saw the bicycle as a liberating and emancipating means of transport. For upper- and upper-middle class women, pedaling meant raising and gaining awareness of their personal freedom and joining the movement for women’s suffrage; a goal they have been fighting for since the mid-nineteenth century and which did not become a reality until the first three decades of the twentieth century.

We love bicycles and wish that the universal suffrage would have been achieved with a pedal stroke, but looking back at history it doesn’t seem to have been the case. One last fact to put the importance of the bicycle in terms of women’s rights in perspective: women cyclists did not compete in the Olympic Games until 1984.