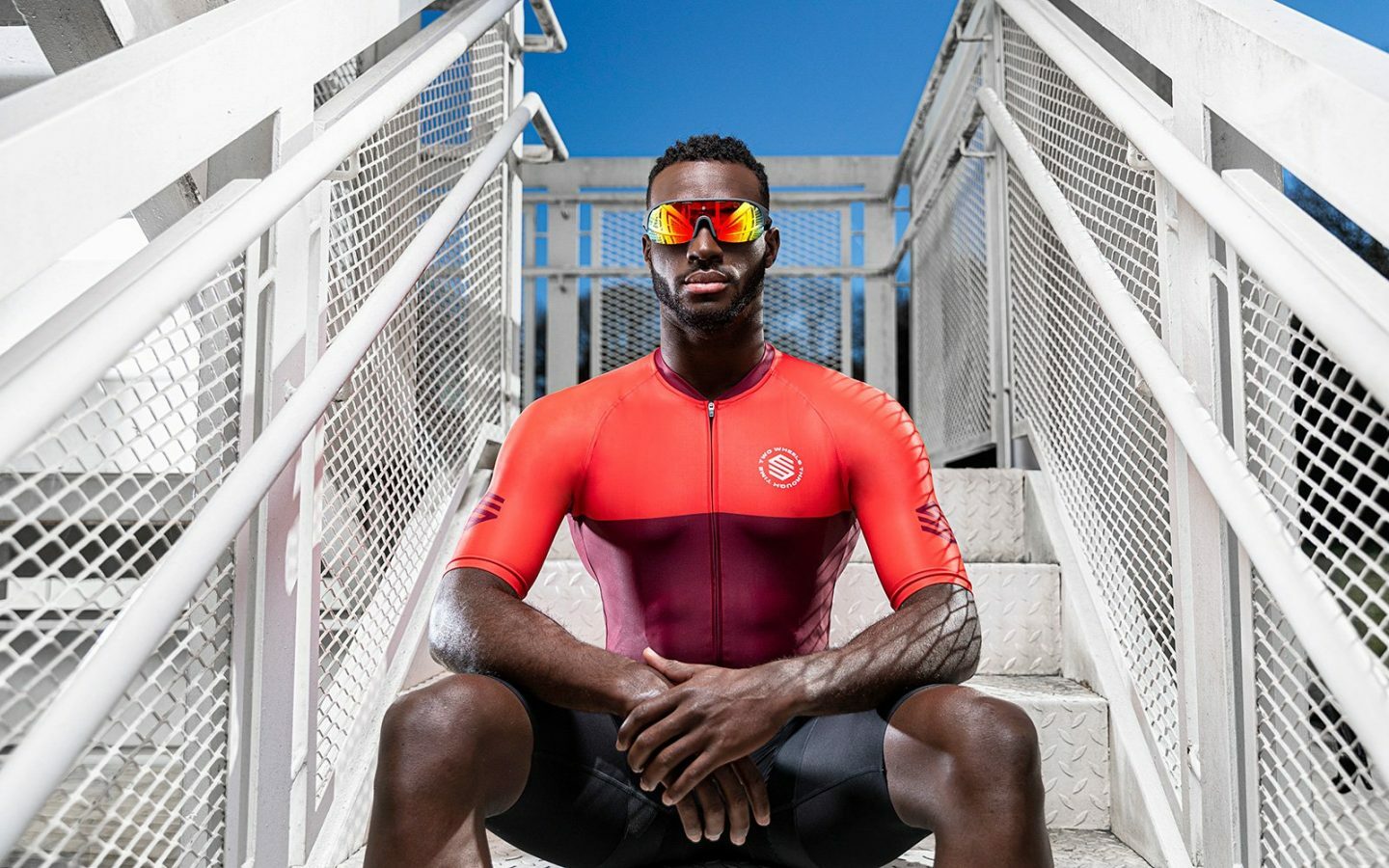 We are proud to announce the new Coppi model: a Siroko cycling jersey within the M2 collection named after one of the best cyclists in history: Fausto Coppi.

Coppi was one of the most stylish cyclists, but only when he was on his bike. He was long-legged, grim-faced, looking a bit sick. Hunger and a tough childhood in an Italian peasant family in the harsh 1920s took their toll. But on his bike Fausto was picture-perfect. He got his first bike when he was 8 years old. He enjoyed a few rides with friends, but the bike was meant for work. It had to be taken care of. If it had been stolen like Antonio Ricci’s bike in The Bicycle Thief, Italy might have never seen the legendary Fausto Coppi who won the Giro five times, the Tour de France twice, the Milan-San Remo three times, the Giro di Lombardia five times, the world championship once and held the hour record for 14 years.

When we decided to pay tribute to the Piedmontese cyclist at Siroko by naming a cycling jersey after him, we started gathering information to create the proper design. If you Google Fausto Coppi you will come across two names: Bianchi, the bicycle brand he raced with throughout most of his career, and Gino Bartali, another Italian cyclist and Coppi’s great rival.

Going through Coppi’s career, the colors we found ranged from the pink of the jersey he won 5 times in the Giro to the celeste of the Bianchi bikes, the blue of the Bianchi team jerseys or the prevailing green of the Italian national team jersey. All quite obvious, right? That’s exactly what we thought. We needed to give it a twist and think outside the box.

For many people, Fausto Coppi was the greatest Italian cyclist of all times. And for half of Italy in the 40s and 50s, he was not. When he died of malaria at the age of 40, 50,000 people came to bid farewell to this cycling legend who had stirred up passions all over the country. Fausto Coppi was pure passion, for bicycles and for cycling. And speaking of passion, the first color that comes to mind is red. But the jersey cannot be completely red, it would be the same as the leader’s jersey of the Vuelta a España. We had to add another color to set them apart. After trying different combinations, we opted for maroon: a color that matches and highlights the red.

Once we knew exactly what colors we were going to use, we started working on different designs to choose from. It wasn’t easy. Hold on Coppi: when our designers start coming up with options, choosing one design is harder than when you first climbed the Stelvio in 1953. 24 km at 7.6% and an altitude of 2,757 meters. Tough and breathtaking at once. 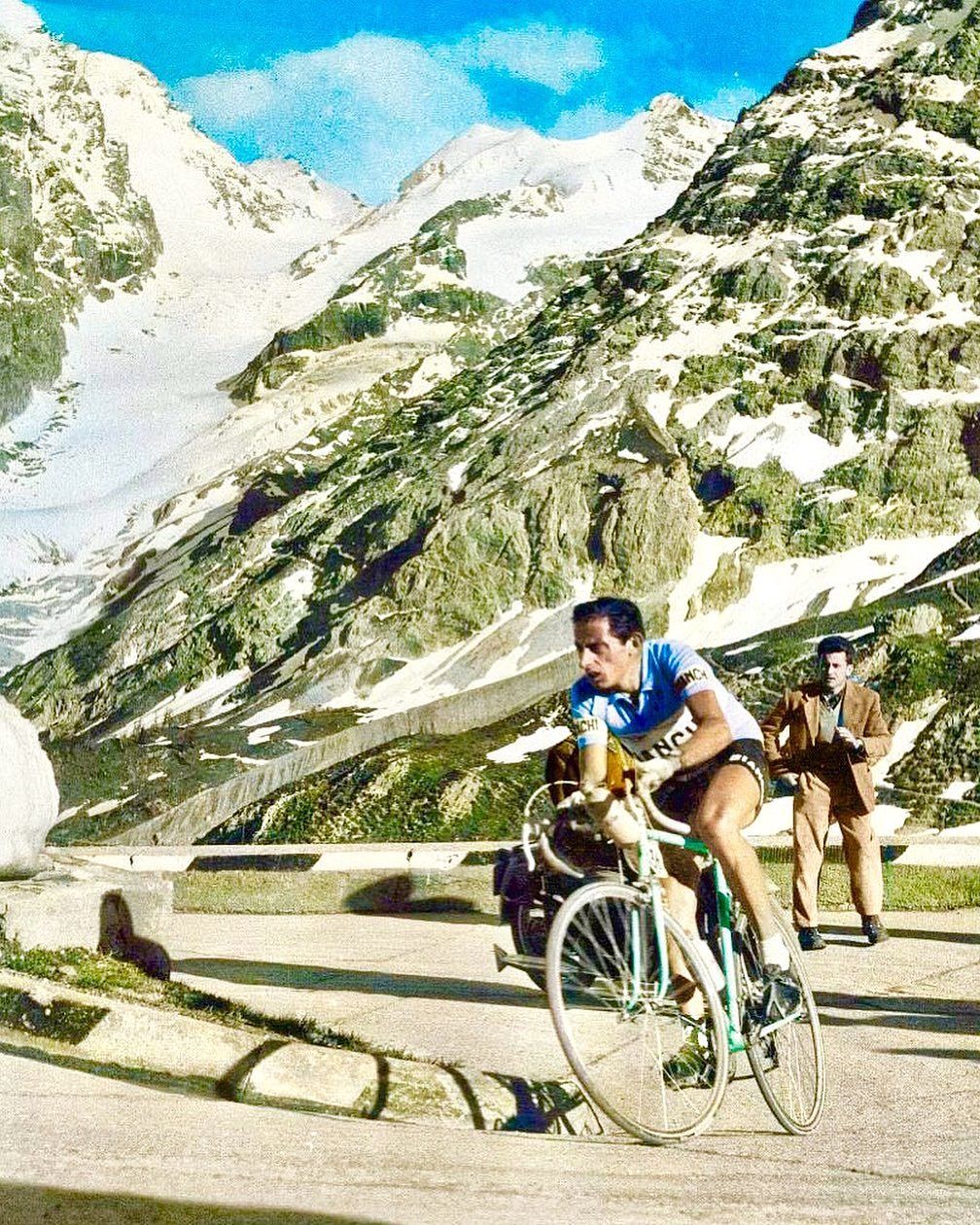 After 48 tornanti we made it to the top and chose the M2 Coppi cycling jersey design that this blog post is all about; you can see it in all its splendor on the product page. A breathable jersey made of a lightweight fabric that quickly wicks away moisture and offers a perfect fit at the same time. It has three rear pockets with reinforced seams to carry everything you need, plus a zippered pouch to keep your most important items safe. Reinforced finishing on the sleeves guarantees a snug yet comfortable fit. We also added a silicone band at the bottom for a better grip. All this combined with a SBS semi-automatic zipper with anti-friction Zip Guard makes this M2 Coppi model a perfectly versatile jersey for any cycling day.

If you are passionate about bicycles and cycling, we are absolutely certain that you will love this new model. If you are not passionate about this sport yet or if you have never heard of the Italian cyclist, here is a summary of his career and achievements:

He won his first Giro d’Italia in 1940. It was the first time he took part in the race and he was riding alongside the great favorite, Gino Bartali, as his domestique. Due to the events of the race, Coppi became the youngest cyclist to win the Giro, at the age of 20.

Fausto Coppi was a great time trialist, which is why in 1942, in the middle of World War II, he broke the hour record at the Vigorelli velodrome in Milan.

Fausto Coppi made his comeback to racing in 1946. He no longer rode with Bartali’s team Legnano, but with Bianchi. Their first head-to-head took place at the Championship of Zürich (Züri Metzgete). Bartali won the sprint, surprising Coppi. The two Italians were extremely eager to compete – that year, on gravel roads and one-by drivetrain bikes (single crankset, 4 sprockets), they completed the race at an average speed of 42.228 km/h; a record that took more than half a century to be beaten (2004 Juan Antonio Flecha at 42.707 km/h).

Two months earlier Coppi and Bartali had competed together in La Classicissima, but they actually only saw each other at the beginning, because Fausto’s performance in the race from Milan to San Remo in 1946 was a true demonstration of his outstanding capacities. Right at the start Coppi got into a breakaway – he didn’t even wait for the Poggio. “He’s lost his mind!”, they thought in the peloton, but Bartali never saw him again. With 147 kms to go, the Piemontese dropped his last breakaway companion and reached the finish line with a 14-minute lead over the second rider and 18 minutes over Bartali. At that moment, on the radio we could hear: “Order of arrival: first Fausto Coppi… waiting for the others to arrive, let’s play some dance music”.

The ’46 Giro looked promising, and so it was. Coppi was the big favorite, but Bartali took advantage of a moment of weakness of his great rival and left him 4 minutes behind. Coppi closed the gap in the Dolomites, but 47 seconds brought victory to Gino, “The Flying Monk”.

In 1947 Fausto was behind Gino again until Coppi’s attack on the Pordoi that crushed the Tuscan rider and placed “The Heron” (l’Airone) in the lead. He won his second Giro as well as the Italian championship and the Giro di Lombardia.

In ’48 he triumphed in Lombardy again and repeated the victory in Milan-San Remo.  He withdrew from the Giro after a controversial situation on the Pordoi with the tifosi (supporters of a team) and the winner, Fiorenzo Magni.

1949 was Coppi’s great year. He crushed his nemesis in the Giro after one of the most legendary stages in history. 254 kms between Cuneo and Pinerolo, almost 5,000 meters of elevation gain with 5 Alpine giants: Madeleine, Vars, Izoard, Montgenèvre and Sestriere. Coppi escaped from the group at the first pass and climbed 192 km alone. The commentators on the radio said: “Un uomo solo è al comando; la sua maglia è bianco-celeste; il suo nome è Fausto Coppi”.

He won his third Giro and the Tour de France, becoming the first cyclist to achieve this double victory. A victory that would have been impossible without Bartali’s help and bad luck. Until 1961 cycling teams were national and the two rivals from Italy became teammates in France. He topped the year with his third victory in Milan-San Remo and his fourth consecutive victory in the Giro di Lombardia.

In 1950 he “only” won Paris-Roubaix and La Flèche Wallonne. In the Giro he fell and had to drop out. In 1951 he broke his collarbone in Milan-Turin and did not make it to the Giro in top form, finishing fourth. Shortly after, his brother died in the Giro del Piemonte and although Coppi competed in the Tour, he was neither mentally nor physically prepared. He finished 10th, 46 minutes behind the Swiss rider Hugo Koblet. In the 1952 Giro, Fausto Coppi will face Hugo Koblet, together with his eternal rival Bartali and Fiorenzo Magni, the winner of 1951.

In the 1952 Corsa Rosa, the campionissimo dominated the whole race. The Tour of France wasn’t different: Coppi’s second double victory and the iconic photo of Coppi and Bartali united by a bidon, with the Belgian Stan Ockers as a fly on the wall. 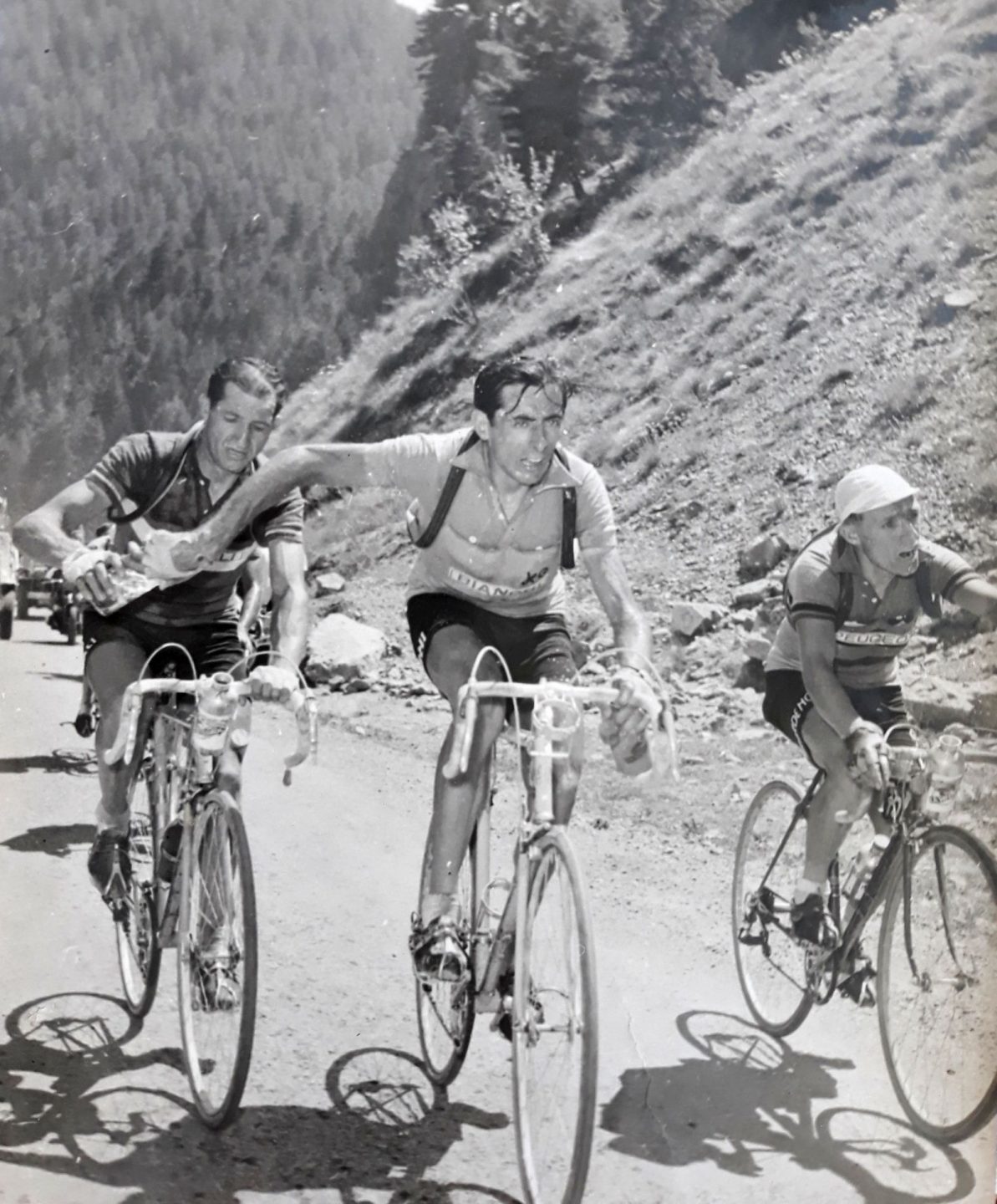 The Belgian came in third in the World Championship which, after many attempts and failures, was finally won by Fausto Coppi in Lugano in 1953. That year he won his fifth and last Giro after conquering the Dolomites again and taking the lead in the penultimate stage, which included the first ascent of the aforementioned Stelvio. This was perhaps the last great feat of “The Heron” (l’Airone) who from that year onwards seemed to be more interested in the passions of life than in his passion for cycling. That passion and the passions he aroused, is what we aimed to capture in our new cycling jersey model: Siroko M2 Coppi.